Poland’s city of the future 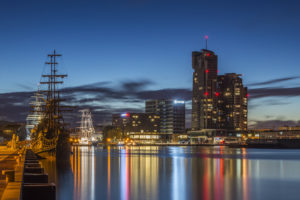 Gdynia, an important seaport in Poland’s north, offers a clearly defined, stable, yet modern strategy focusing on specific sectors (Maritime Industry, Business Process Outsourcing/Shared Service Centers, as well as Transport, Shipping and Logistics). It is a medium-sized city, with a population of 250,000. One of its greatest assets is its strategic location on the south coast of the Baltic Sea, at the junction of important international transport corridors, running from Scandinavia and northeastern Europe toward Southern Europe and the Mediterranean Sea. Its entire metropolitan area has experienced economic growth and the city is considered a strong pillar of the Pomerania region. It has a good investment climate and provides sound conditions for many business activities. It also has an exceptionally high standard of life, which is Gdynia’s distinguishing feature.

The city supports entrepreneurs and investors at each stage of business activity, from advising on the best investment location, through facilitating the paperwork to successful cooperation with established businesses. One example is the idea of a “single service desk” in the Gdynia Business Support Centre, where all the paperwork regarding establishing a new business can be completed at a single desk and takes about 20 minutes. The city also offers the services of the Gdynia Business Incubator to support micro, small and medium-sized businesses. More than 200 information and communications technology (ICT) companies use the nearly 80,000 square-meter Gdynia Pomeranian Science and Technology Park, Constructor’s Park and Baltic Port of New Technologies, where they can take advantage of state-of-the-art conference and office centers, biotechnology and electronic labs, and prototype workshops, as well as gain access to professional advice and training. The innovative solutions developed by the companies have found customers in Poland and internationally.

In 2017, Gdynia received an ISO 37120 certificate and is the only Polish city recognized by the international World Council on City Data platform (www.dataforcities.org), listing global leaders in standardized city data, actively creating sustainable and prosperous cities. This only confirms Gdynia’s attractiveness and competitiveness on an international scale.

Gdynia Mayor Wojciech Szczurek said: “Gdynia and the other cities in the Tricity area (Gdańsk and Sopot) have already become the best BPO/SSC zone in Poland. Poland has become the top market in Europe and second in the world (after India) for such services. The economic potential of the city has been confirmed by several independent institutions. Among many others, the editors of fDi Magazine once again named Gdynia a ‘Polish City of the Future’ in their 2017/18 ranking. This distinction was presented at the 2017 MIPIM exhibition in Cannes, France. Gdynia topped the overall medium-sized cities category and was named first among such cities in two other categories: Economic Potential and Business Friendliness.”

This investment policy results from Gdynia’s strategy to 2030. The city council knows exactly where it wants to see the city in 20 or even 30 years.

Gdynia’s investment policy stems from its strategy to 2030. The city council knows exactly where it wants to see the city in 20 or even 30 years. Currently, Gdynia can offer about 200,000 square meters of office space, but plans to host investments that will increase this figure significantly in the coming years. The results of cooperation between the city and business investors include the creation of a modern and prestigious district in Gdynia that will combine residential functions with those of business and services.

Gdynia’s Sea City project covers 20 hectares of investment area. On one side, it has the waterline, on the other – the center of a city with a population of a quarter million. Sea City is a former shipyard area that is currently undergoing the process of revitalization. This is one of Gdynia’s main strategic objectives. These projects will provide nearly 500,000 square meters of modern office and commercial space. The stylish architecture being developed for this area is will fit in with the historical buildings, maintaining their original character.

A new marina is already under construction, soon to be followed by a modern office and residential complex and commercial and service buildings. The transport network for the whole project has already been designed. According to the estimates prepared by the city planners, within the next few years this area may become home for 8,000 people and serve as a workplace for another 4,000, which will require a doubling of the residential and service area within the city center.

The Tricity area is a large academic hub, with 23 institutions of higher education and close to 100,000 students. The investors will find a lot of young people who are currently entering the job market with excellent knowledge of languages, such as German, Swedish, Danish and Norwegian, among many others.

Gdynia is well-connected within the region. The SKM (Fast Urban Railway) transports you from Gdynia to the center of Gdańsk in 30 minutes. It also has the Pomeranian Metropolitan Railway and a vast public bus and eco-friendly trolley bus systems. Gdynia also supports a car-sharing initiative for commuters. It is well-connected to other cities in Poland: modern trains run from Gdynia to Warsaw every hour.

Regular ferry services are provided to all the Scandinavian countries. The Gdansk Lech Walesa International Airport is only 30 minutes away. The A1 motorway, the Tricity bypass and planned express routes provide good access to city roads. Gdynia has also announced the construction of a new public ferry terminal. This is aimed primarily at making it possible to handle significantly larger, up to 240-meter passenger ferries that are entering the shipping market. It is an investment necessary for the development of the “Gdynia-Karlskrona Motorway of the Sea.” European Union funds have been designated for the investment project. Its estimated gross cost exceeds PLN 200 million.

Gdynia’s standard of life is very high – it has the cleanest air in Poland. This has become a very important aspect when employees choose a place of residence, and which therefore has a great impact on potential investments. Half of the area of the city is covered by forests and offers ideal conditions for walking, cycling and other after-hours activities. Gdynia has over a dozen kilometers of beaches and the most sunny days in Poland.

You can learn more about Gdynia’s sustainable growth and future investment plans at MIPIM in Cannes and EXPO REAL in Munich.